A bit late, but this: 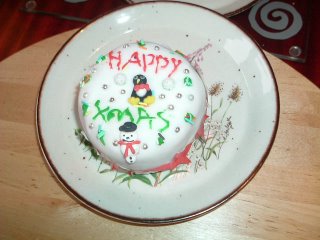 was made by Amanda at Guides in the run up to Christmas.

It's only small, but it's a real Christmas cake, very rich, properly iced and all.

Posted by Peter Tribble at 10:22 PM No comments: 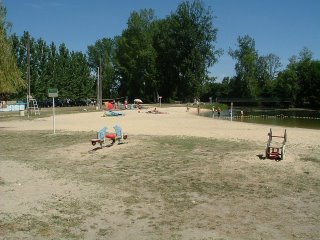 It seems like a long time ago now, but over the summer we went to France, and this was typical weather. Specifically - beautiful sunshine!

Posted by Peter Tribble at 11:04 PM No comments:

Got my car back!

Looks nice and clean at the back - all the dents and squashed bits are gone. So that episode is over, thankfully.

It's nice to be back in my own car. It was strange driving the loan car about for a couple of weeks, and while I thought it would be interesting to try something different, I'm glad to be rid of it.

For the inquisitive, I had a 3-door Vauxhall Astra SRi. Drove well enough, but there were a few things I didn't like. I really didn't like the controls. The indicators were a bit erratic; I don't like the main lights being on the dash (in particular, making the foglights difficult to get to is a bad idea); the heating and radio controls are very messy (and sufficiently obtuse to be quite dangerous, actually). The windscreen wipers and washer were pretty poor, and the CD player had a habit of skipping. Being a 3-door was very awkward - it was very tricky to get into the back, and the way the front seats tipped and slid didn't work well.
Posted by Peter Tribble at 10:55 PM No comments:

It appears that the Cambridge Misguided Busway scheme has been given the go ahead.

For those that don't know, this involves the conversion of a disused railway line into a special trackway for buses, parallel to a very heavily congested trunk road. The claim, presumably, is that this will provide an alternative and relieve the congestion.

Unfortunately, what we are going to see is a horrifically expensive white elephant.

The best thing - and the obvious course of action - would have been to convert the disused railway into a used railway.

The fundamental problem lies in the idea that you can spend at least Â£70 million and convert a railway line into a successful bus route This simply won't work, because doing so combines the worst features of rail and road transport. The snag with railway lines is that - partly because they were built so long ago - they tend not to follow traffic patterns. Not only do they not follow the traffic, the stations tend to be in useless places. The misguided busway inherits these weaknesses.

The advantage of using the railway as a railway is that, while it suffers from these weaknesses too, it can give benefits in other areas. In particular, it can act as a feeder line, with commuter traffic a particular target - so you can go to a local station for a long-distance trip. Also, the line could be used as additional or diversionary capacity for other rail traffic.

Posted by Peter Tribble at 7:30 PM No comments:

Must have slept through the rather large bang from the exploding fuel storage depot yesterday, although we're probably in range and know people - usually slightly closer, it must be admitted - who did get woken up by it.

The knock-on effect was chaos on the roads. But not quite in the manner I would have expected. The A1(M) south was busy this morning between junctions 9 and 10, with traffic queuing back from Stevenage. But was otherwise pretty clear once I worked past that queue. It did seem a little busier coming the other way. Coming home this evening the usual delays at junction 7 were worse than normal, but I reckon that was due to a localized incident - half a dozen cars parked up on the hard shoulder was one clue, and also the fact that traffic was actually lighter than normal (presumably due to delays further south round the M25).

From my office I can see the plume of smoke, which is pretty massive. But from that distance the base is hidden so I can't see the fire itself. But I'm still amazed that an explosion of that magnitude didn't have much heavier casualties.
Posted by Peter Tribble at 10:36 PM No comments:

Every term they put on a concert, and we went along last week. The music was excellent - highlights included "Susanna and Polly meet Liza at the Races" and the theme from "Blackadder".

Not only that, but despite delays on the A1 I made it in time, and Melanie was amazed at being able to get from one side of Cambridge to the other, eat, and get back again in 50 minutes.

There seems to be some seasonal music being practiced at the moment, so we may get an extra private concert in a couple of weeks...
Posted by Peter Tribble at 3:07 PM No comments:

Driving on the A1(M), I see an awful lot of bad driving. (Not just people who run into the back of me, either.)

This takes a variety of forms. We're all familiar with the middle-lane moron - sitting there in the middle lane doing 50, effectively turning a 3-lane motorway into a single-lane queue. Then there's
the compulsive lane-changer, who will dart into any space in another lane at the first sign of delays, even if they lose out in the process. (This last habit generates a good illustration of the transition between laminar and turbulent flow.)

Often the root cause of much of the bad driving I see is sheer impatience. And the possible gains are infinitesimally small - usually you might move up one car in the queue.

But last night was just lunacy. Up the A1 there's a choke point where it goes from 3 lanes to 2. So at the merge point I'm letting a lorry into the space in front of me. All of a sudden this old banger in the inside lane swings onto the hard shoulder to pass the car merging in behind me, shoots between me and the lorry (almost at right angles), screeches up past the lorry, and swings at right angles again across the front of the lorry, back on to the hard shoulder, and disappears off to heaven knows where, with the lorry driver flashing his lights and tooting his horn.
Posted by Peter Tribble at 12:56 PM No comments:

After my recent unfortunate incident, my Toyota went in to be repaired today. It's going to take a few days, so I've got a hire car to get around in.

Not just any car, either. This is a black Vauxhall Astra SRi, which is allegedly pretty fancy. Still, I prefer the old Toyota - it has a level of solidity that is difficult to match. (And I'm not too bothered by cars that are bland or boring. It's whether they do the job that matters.)
Posted by Peter Tribble at 10:01 PM No comments: